You are viewing an old version of this page. View the current version.

The labeling of terminology in the segment is state-of-the-art in modern translation environments - as it is also the case in translate5.

For further configuration of this feature, see the openTMStermTagger plug-in and the below section of term classification mapping.

Examples see in the screenshot at the top.

If everything is ok with the term, it is underlined blue.

Everything is ok, since a target term is not defined in the imported terminology.

The term is marked as deprecated or forbidden in the terminology.

All terms are shown, that belong to the same term-entry as the term in the segment (even if they themselves do not come up in the segment) 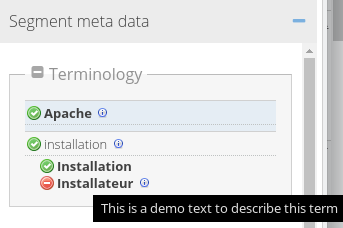 Each term is marked with a classification:

The term definition is visible at each term as soon as the mouse is dragged over the small info icon.

With the help of the translate5 plugins "LockSegmentsBasedOnConfig" and "NoMissingTargetTerminology" all segments can be locked, which do not contain terms which are underlined red.

Or in other words: all segments are locked, where no terminology needs to be corrected. This can be used to correct terminology of Translation Memories in translate5